ARIS Reviews: Beautiful World, Where Are You by Sally Rooney 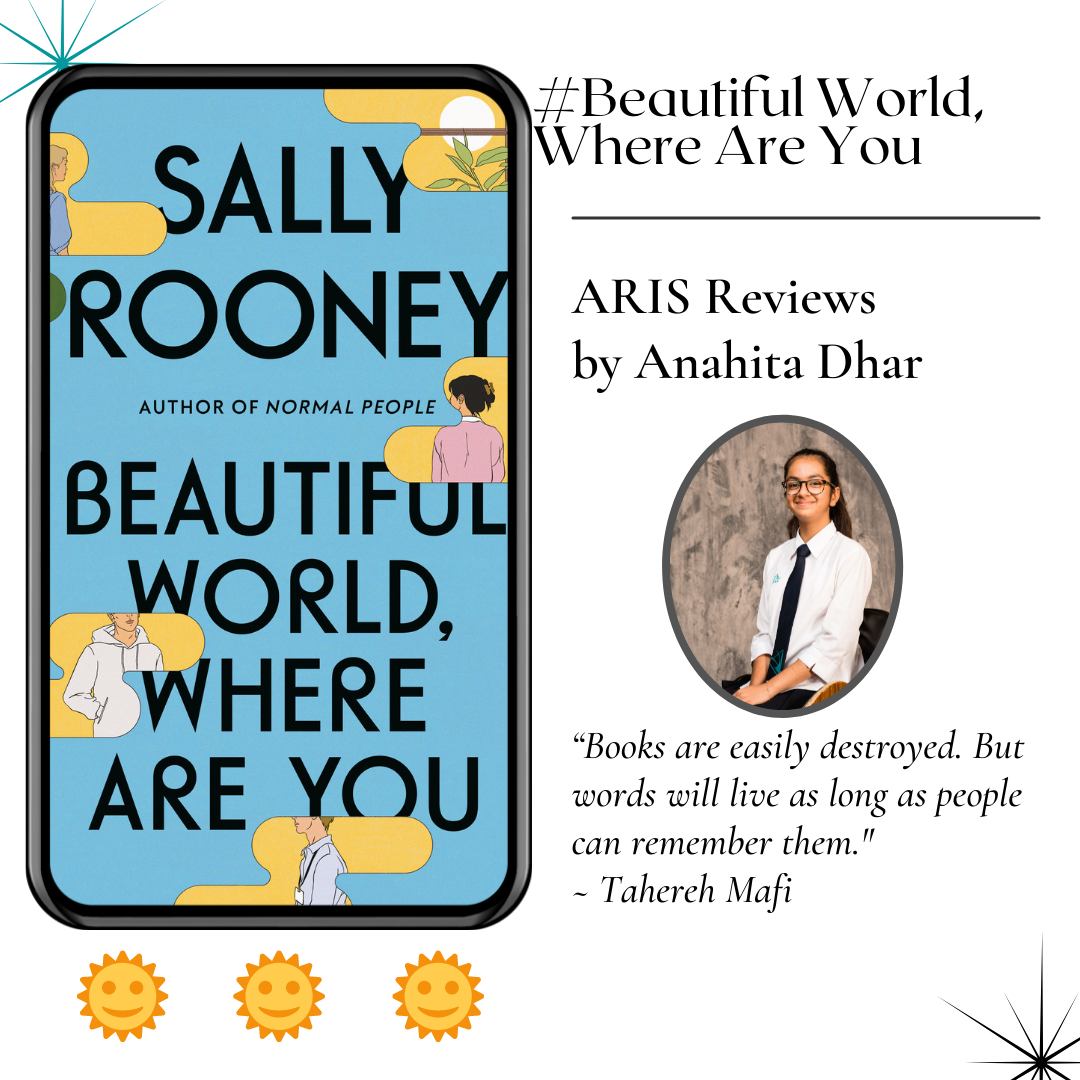 Maybe we're just born to love and worry about the people we know and to go on loving and worrying even when there are more important things we should be doing.

Absolutely amazing. Not in the way that I couldn’t put it down, but in the way that I know I'll be thinking about it for a long, long time. This review is going to be very unconventional, so bear with me. The story revolves around the ups and downs of life, for 4 people: Alice, Eileen, Simon and Felix. That’s all. That is the entire premise of the novel. There is no plot twist, no murder mystery and no intense battle. It is a book about people and their relationships. I’m so confused as to why I even like it? I’m naturally drawn to books that are page-turners and are always exciting… this was nothing like that. Alice and Eileen are best friends and most of the novel is made up of their email exchanges. Which I loved. So much intellectual depth goes into those emails that sometimes I need to read them over to understand what’s going on. There’s one about Dublin, and how it has barely any skyscrapers, how the sky is never once interrupted or punctuated by anything at all. Alice says it gives the sky a position of dominance, she tells Eileen that she wishes someone would cut a hole in it for her. I read that and was like… huh. These are things people actually think about. The book manages to remind us of things... things we're a part of every day, that are right in front of us, but that we somehow still fail to discuss. Either Sally Rooney is a literary genius or I am just an idiot who thinks she’s stumbled upon great writing, when all of it is, in fact, common knowledge.

This was an influential book, but not in the way you’d think. It hasn’t changed my life or anything, or the way I think, but it has changed how I respond to certain thoughts. Like right now, a few minutes ago. I had a thought that was slightly off-putting, it was hypocritical I suppose, and I instantly thought of a response to myself which is something Alice might’ve said. Something that made me realise that the original thought, the off-putting one? It wasn’t what I actually thought, I was just upset. It feels brilliant, having a mini Alice in my head. I somehow understand her more than I understand the others. This is weird seeing as I have nothing in common with a 30 year old novelist with a history of psychiatric illness. I did absolutely love her though. As I did this book, have I mentioned that already? Every time someone said something I was wonderstruck, it felt surreal that people actually have conversations like these. I feel as if this book has really broadened my perspective on things and allowed me to see some things differently now. (Another example I’m sorry, I’ve just never been more excited about writing a review) I was watching a movie today, it was a rom-com, and I found it, wait for it: mind-blowing. There were theories and connections and my brain’s reaction to it was simply: wow, this is staggering. It was a rom-com.

I hope you’ve realised by now I’m not actually talking about the plot of the book. I’m not going to, actually. Not because I don’t want to, but because I wouldn’t know how. You know when you go to a concert and someone asks how it was, and you reply “Oh man, you had to be there”? This book is about that concert. You have to read it to understand what I mean and what I’ve been incessantly babbling about.

So please, please read it. Though keep in mind that if you enjoy thrilling/riveting novels ONLY, you might not like it. Read it if you, however, enjoy casual, fun, thought provoking novels that bring out the philosopher in you.

But! Keep in mind that It is not suitable for a younger audience because:
1) It contains some mature scenes.
2) I genuinely do not think you would enjoy it.
I know I wouldn’t have. If you gave me this book 2-3 years ago when my head was buried in a Throne of Glass book, I would have absolutely loathed it. I can almost imagine what I would’ve said; “Who cares about Dublin and its sky? Why would someone even write about that? Who would read this?!” I would, younger me. What does that say about me? Maybe that I’ve grown up? (god, I hope not) or that I’ve simply expanded my reading range? Who knows? I bet Alice would. She’s very perspicacious. But yes, please go read it!

I give it a full sun: ☀️!! I’ve also realised I rate most books with the sun, and I hope you don’t think I’m being dishonest, I just have great taste :(

Also! Considering this gets uploaded on the 15th of November, the second book in the ‘These Violent Delights’ duology comes out tomorrow! I’m so so so excited, and will definitely review it when I finish. Happy book release day in advance! And now finally, if I haven’t already convinced you, here are a few beautiful paragraphs from Beautiful World, Where Are You. *Beware... it’s very long:

“Have I told you I can’t read contemporary novels anymore? I think it’s because I know too many of the people who write them. I see them all the time at festivals, drinking red wine and talking about who’s publishing who in New York. Complaining about the most boring things in the world – not enough publicity, or bad reviews, or someone else making more money. Who cares? And then they go away and write their sensitive little novels about ‘real life'. Why don’t they write about the kind of lives they really lead and the kind of things that really obsess them? Why do they pretend to be obsessed with death and grief and fascism – when really they’re obsessed with whether their latest book will be reviewed in the New York Times?
If novelists wrote honestly about their own lives, no one would read novels, and quite rightly! Maybe then we would finally have to confront how wrong, how deeply philosophically wrong, the current system of literary production really is – how it takes writers away from normal life, shuts the door behind them, and tells them again and again how special they are and how important their opinions must be.

The problem with the contemporary Euro-American novel is that it relies for its structural integrity on suppressing the lived realities of most human beings on earth. To confront the poverty and misery in which millions of people are forced to live, to put the fact of that poverty, that misery, side by side with the lives of the ‘main characters’ of a novel, would be deemed either tasteless or simply artistically unsuccessful. Who can care, in short, what happens to the novel’s protagonists, when it’s happening in the context of the increasingly fast, increasingly brutal exploitation of a majority of the human species?”