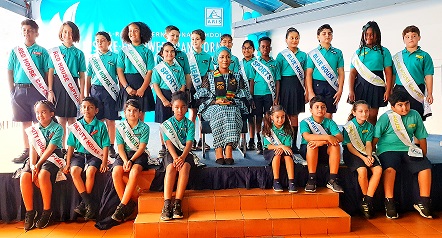 Behaviour is promoted through a House points system where children are allocated a house on entering the school. All pupils compete for House points through classwork, behaviour, attitude to work, respect for others etc.

House points are tallied weekly with a running total being announced each week at Assembly. The House with most points in December and June respectively are given a treat in recognition. Points system all exists within each class which is appropriate to the age and stage of the pupils. These points systems also feed into the main House points system. Pupils are motivated to attain by their work being recognised both in class and as part of School Assemblies. To promote attainment and wider achievement during the series of weekly assemblies, children with the highest number of points are nominated for “Pupil of the Week” by the class teachers.

All class teachers and subject teachers involved in the teaching of pupils in Years One till Six are placed into one of the school Houses, with the exception of the PE staff. The Head of Primary oversees the allocation of pupils and staff to Houses.

House captains are elected from Year 6, and the Vice House captains from Year 5, through a voting ballot system. The pupils meet on the first Tuesday of every month to discuss the performance of their Houses, and how best they need to achieve their goals in order to be the winning House.

The House system also provides a sporting competition for pupils, as house points are not only gained for academic and behavioral performances, but also for sporting achievements throughout the year. House and sports cups are awarded termly and then annually to recognise these achievements.

The House Point system is designed to reinforce positive behavior and provide a competitive context for students, building teamwork and a desire to succeed. House points are awarded for individual attainment in the academic or extra-curricular program and for service to the school or wider community. House Points are earned by excellent work, outstanding effort, good behaviour, exhibiting the Learner Profile attributes and any act that portrays positive accomplishments Expected House Points are also awarded for House events during the school year, i.e.

House meetings are held on the first Tuesday of every month,

Inter-House sports competitions (after school hours) run throughout the year. These events are organised by the PE Department.

All staff are expected to attend the events which take place during school hours and to perform such duties as may be allocated by the Head of PE and/or the Head of House. Students are expected to wear the PE attire, with the colour wrist band of the appropriate House colour during these events. Staff are invited to add their support by dressing in the appropriate colour. Casual clothes may be worn on these occasions.

On a weekly basis, the principal will announce the winner house and the highest achievement in house points in classes from year 1-6. Pupils with the highest house points are given the King and Queen Certificates, as well as the House and Class with the most points accumulated, get awarded with certificates, during the Wednesday Assembly.

All Class Teachers in Years 1-6 are responsible for recording House Points for the pupils in their class. This is usually done by displaying House Charts in the form room. This recording is essential as House Points are totaled at the end of each week.

A standard sheet is available for issuing House Points to individual pupils. Specialist teachers should use these or departmental specific sheets, as applicable. Awards